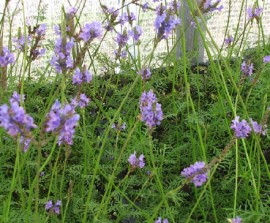 Lavandula minutolii. Half Day Sun. Perennial. Height: 3’ Width: 2.5’
Grey Green leaves with regular smaller lobed divisions that create the leaf shape.
A double bracket of violet blue blooms create a spear-like appearance, with the upper lobes twice
as large as the lower lobes. This lavender does not have a classic lavender scent but instead has a more camphor-like aroma.

A sturdy lavender with lace-like Green Leaves often give a fern-like appearance with thin spikes of rich blue purple flowers. This Lavender does not have much traditional lavender scent and is sought predominately for its beautiful, fine pencil-spike dark purple blooms. Its scent is more of a camphor-like smell than a traditional lavender scent. Has a very long blooming season. Has very long stiff seed heads. When stems appear woody then break the stems back for new growth and blooms. This Lavender has the longest blooming season of all the lavenders that NHF carries. Does well in a pot as well as the garden. This Lavender can handle the high humidity better than other lavenders for South Texas. This lavender requires frequent feeding because it grows rapidly and and constant blooming, particularly nitrogen. Here at NHF, we cultivate this minutolli lavender from original cuttings from Madeline Hill.
This lavender prefers its roots compact and protected. To encourage new blooms cut back old flowers to the node (the node is the intersection where the blossom meets the stem.)

Predominately used as an ornamental. It’s rich lacy leaves and striking violet blooms make it an elegant addition in the garden
or in a container. Great for insect and deer repellent in the garden.