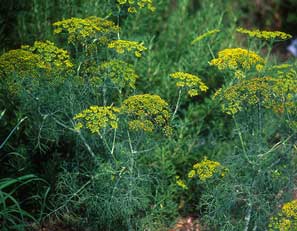 Achillea millefolium ‘Moonshine Yellow’. Perennial. Sun. Height: 12-18” Width: 10”
Yarrow is a flowering plant native to Europe, it has naturalized throughout temperate North America. In New Mexico and southern Colorado, it is called plumajillo, or “little feather”, for the shape of the leaves. Several tall stems rise from a rhizome root (fibrous underground horizontal rootstock) with lance-shaped and finely divided silver leaves evenly distributed up the stem. Golden Yarrow blooms in bright yellow, flat-domed shaped flower heads; up to ten or twelve per plant.

Yarrow is a drought tolerant species and often found in the grasslands and open forests throughout the United States. Yarrow responds best to soil that is poorly developed and well drained. Thrives from Spring to Fall. Notorious for its reputation as invasive, the Texas heat apparently keeps that tendency in check. This particular yarrow is very pretty in the garden because it is a sturdier plant and doesn’t get as limp and gangly. Hardy throughout the winter but guard against allowing it to get too dry nor too wet. Trim back dead flower blooms to encourage new growth. Will bloom from Spring throughout Fall. This is one yarrow that grows well in a pot.

Great for use in teas, Yarrow has seen historical use as a medicine, often because of its astringent effects. Decoctions have been used to treat inflammations, such as hemorrhoids, and headaches. Confusingly, it has been said to both stop bleeding and promote it. Depending on the form it is administered it can do both, which is why when dabbling in using herbs for medicine it is proper to contact a herbalist or other expert.